One historical characteristic  of Colombia has been the high mobility of its population, recorded in three waves: the 1960s (mostly to the United States, first wave), the early 1980s (to Venezuela, second wave) and the 1990s nineties (to Spain, third wave).

Colombian emigration to the United States occurred in particular in the 1960s and 1970s, and was repeated in the 1990s, especially due to economic factors such as employment prospects and increased revenue and, to some extent, to political reasons related to the threat of illegal armed groups. This emigrants were typically a highly-educated group, with good knowledge of English, with more women than men and a significant presence of the middle and upper class.

Emigration to Spain rose sharply in 1998, which is explained in large part by the economic crisis in the country in 1998-1999, especially in certain regions such as the Coffee Belt, and this country’s appeal in relation to job opportunities for the immigrant community - in addition, of course,  to the ease of language for Colombians. Currently, the Colombians in Spain are the fourth largest nationality group, preceded by Moroccan, Ecuadorian and Romanian. Colombian immigrants in Spain are mostly women; their education level is average; and they are in the middle and lower- middle class level. 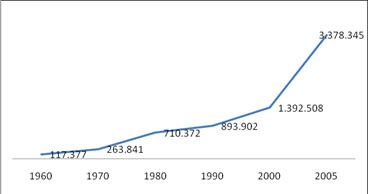 Colombian international migration is a growing and heterogeneous phenomenon: Its causes and consequences are  strongly linked to local and global situations. Colombians who migrate do so for different reasons and to different destinations. One of the main reasons is to find work, taking into account the demand for relatively unskilled labor in developed countries and the effect of globalization on a workforce seeking higher pay in developed countries. Other reaons for emigration are family reunification, improved levels of quality of life and the offer of higher education studies in other States.